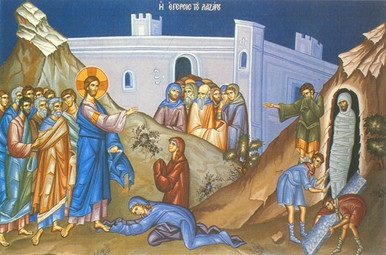 Icon of the Raising of Lazarus

This brightly-colored icon is a fresco on the wall in the Monastery of St. John near Athens.   Mary and Martha kneel down before Christ in supplication as Lazarus, their brother, is called and comes forth from his tomb still wrapped tightly in his grave clothes.  One of the attendants covers his nose expecting that Lazarus will stink of death, but sees instead the miracle of resurrection presaging the Lord’s own Resurrection just eight days later.

The Lord of Life raised Lazarus from the dead after he had been in the grave for four days, so he had started to decompose.  He waited purposefully those days before returning to Judea.  Jesus even wept over him, though He always knew what He was going to do.  When Christ went on the Sabbath to Lazarus’ tomb, a deep cave in the rock on the way down from Bethany to Jerusalem near the Garden of Gethsemane, He called Lazarus back to life by His Creative Word.  This was a great miracle, but those whose hearts were hardened then wanted to kill both Jesus and Lazarus because this public miracle was influencing many to believe in Christ.   We, too, are challenged to constantly open our hearts to Christ in love.