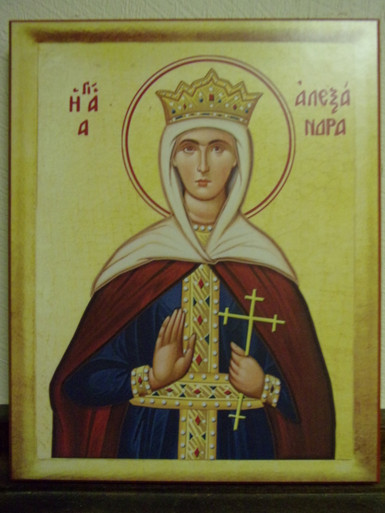 Holy Empress Alexandra was the wife of Emperor Diocletian.  She raised her daughter, Valeria, as a Christian.  When Emperor Maximinus asked for Valeria's hand in marriage, she refused.  Emperor Maximinus banished her to Syria, where she lived with her mother.  After Maximinus' death, the two returned to Nicomedia.  They trusted in the mercy of the Emperor Licinius, who had subscribed to the Edict of Milan, which gave Christians freedom of religion.  Licinius, however, had secretly remained their enemy.  He gave orders for Empress Alexandra and Valeria to be executed.  They were beheaded, and their bodies thrown into the sea.