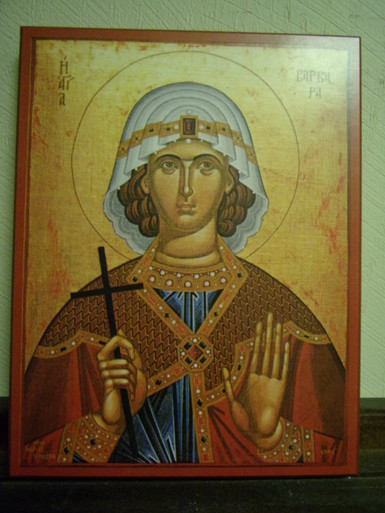 Barbara was the daughter of a rich pagan named Dioscorus.  She was carefully guarded by her father who kept her locked up in a tower in order to preserve her from the outside world.  Having secretly become a Christian, she rejected an offer of marriage that she received through her father.

Before going on a journey, Barbara's father commanded that a private bath-house be erected for her use near her dwelling, and during his absence, Barbara had three windows instead of the two originally intended put in it as a symbol of the Holy Trinity.  When her father returned, she acknowledged herself to be a Christian.  Her father flew into a rage and drew his sword to kill her, but her prayers created an opening in the tower wall and she was miraculously transported to a mountain gorge.  After a long search, Dioscorus finally caught Barbara and handed her over to the prefect of the city, Martianus.

Martinianus had her cruelly tortured, but Barbara held true to her Christian faith. During the night, the dark prison was bathed in light and new miracles occurred. Every morning, her wounds were healed. Torches that were to be used to burn her went out as soon as they came near her. Finally, she was condemned to death by beheading. Her father himself carried out the death-sentence.